The Overland Trail is a 39 seat Club Lounge with Barbershop and Shower. It was built by the Pullman Standard Car Manufacturing Company for delivery to the Southern Pacific Railroad in December of 1949. Numbered SP 2981, the car was specifically ordered in October of ’47 for the San Francisco Overland, a train jointly operated by the Southern Pacific, Union Pacific, and the Chicago & North Western railroads between Chicago, IL and Oakland, (San Francisco) CA.

Southern Pacific club-lounge 2981, the first of the six barbershop lounges, was outshopped from the Pullman plant in Chicago, Ill. in December of 1949. The lounge car was a standard 85 foot long car measuring 10 feet wide and 13’6″ tall. It was delivered in an elegant two-tone gray paint scheme (with white stripes separating the grays).

The Overland Trail (SP 2981) was originally assigned to the “Overland Route” which was the path of the original, historic transcontinental railroad. The transcontinental railroad was a joint project by SP predecessor Central Pacific which built from Sacramento, California east, and the Union Pacific Railroad which built west from Omaha, Nebraska. This route was completed joining east and west with the historic driving of the golden spike at Promontory, Utah on May 10, 1869. The third member of the “Overland Route” was the Chicago and Northwestern filling the gap between Omaha and Chicago. This total route covered 1,780 miles from Chicago to Oakland.

A most gracious quarter-circle bar adorns one end of the lounge and is surrounded by deeply etched, diamond patterned decorative mirrors and etched glass partition “wings” (with a pine bough motif), while photo murals are featured on each side of the doorway at the other end of the lounge (opposite the bar) and depict Mount Lassen to the left and El Capitan at Yosemite to the right. Murals, applied to many different cars from this order, featured scenic highlights at locations all along the Southern Pacific’s vast system. The murals were part of the Southern Pacific’s promotion of tourist travel through-out Southern Pacific territory.

The Overland Trail is equipped with (what is thought to be) the sole operating streamliner era railroad barbershop in the world. Once a common feature aboard the premier trains of old… the railroad barbershop succumbed to the realities of the jet age in the mid 50s.

The 2981 served faithfully, racking up around 5 million miles for the Southern Pacific during its railroad career. However, as the fortunes of passenger trains waned in the 1950s and 60’s, so too did the glory of this stylish railcar, when in October of 1966, the beautiful lounge of 2981 was stripped and converted into a dance floor. The Southern Pacific (wanting to keep idled onboard service crews working during the winter), along with the Reno Chamber of Commerce, started the Reno Fun Train (a winter time “gamblers special”) which ran between Oakland, CA and Reno, NV bringing revelers, who otherwise would not make the drive from the Bay Area over the treacherous Donnor Pass, to Reno. 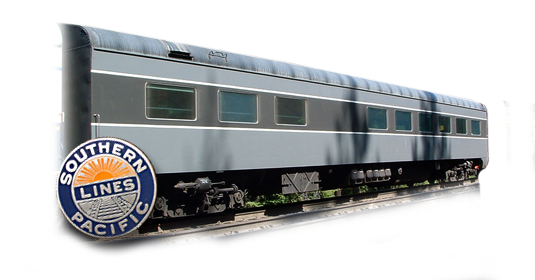 Amtrak was created on May 1st, 1971 to “rescue” the American passenger train. The 2981 was purchased by Amtrak in 1973, and numbered Amtrak 3500. She finished her railroad career still assigned to the Reno Fun Train serving as a bar/dance car into the late ’70s. The car transitioned to private hands after Amtrak retirement and spent a decade as a derelict on various railroad spurs under several owners. Fortunately for the 2981 (and we hope, many future generations), a new chapter has been written for this glorious car. Once again adorned in authentic railroad colors, she has been given the name Overland Trail and has undergone extensive mechanical, structural and cosmetic restoration to return her to the rails as a classic form of travel, suitable for the stylish and sophisticated, or for those simply wishing to relive a bygone era. 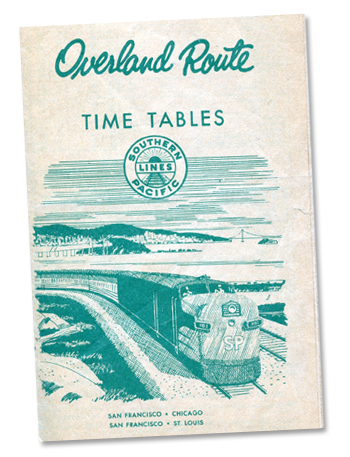 The Overland Trail is a 1949 Pullman Standard Lounge from Southern Pacific. 39 lounge seats with historical and original quarter-round bar and barbershop. 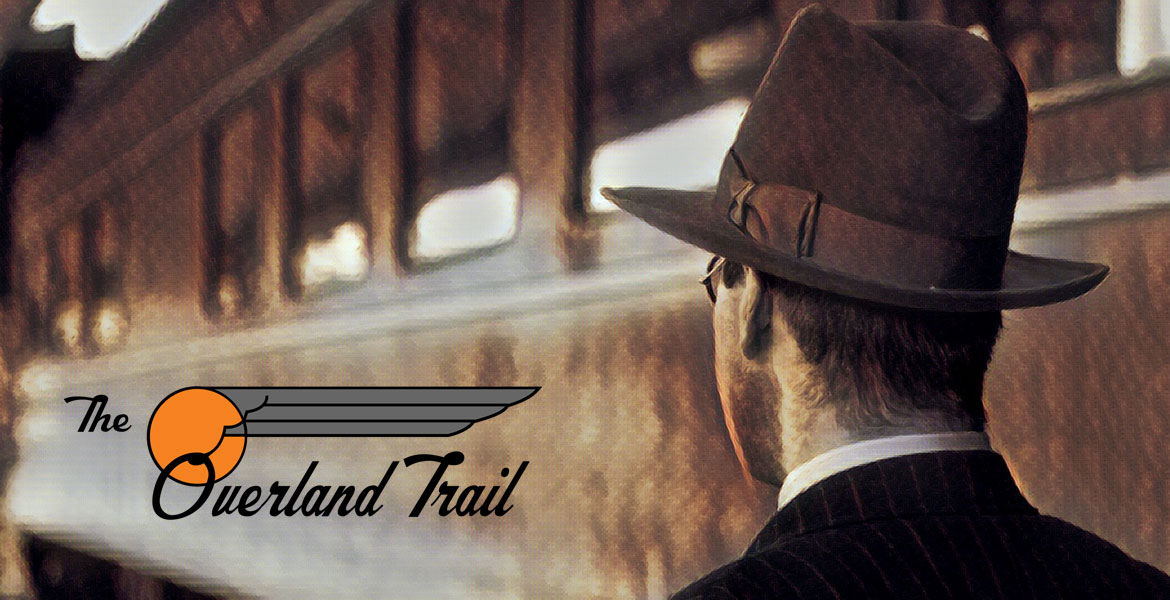 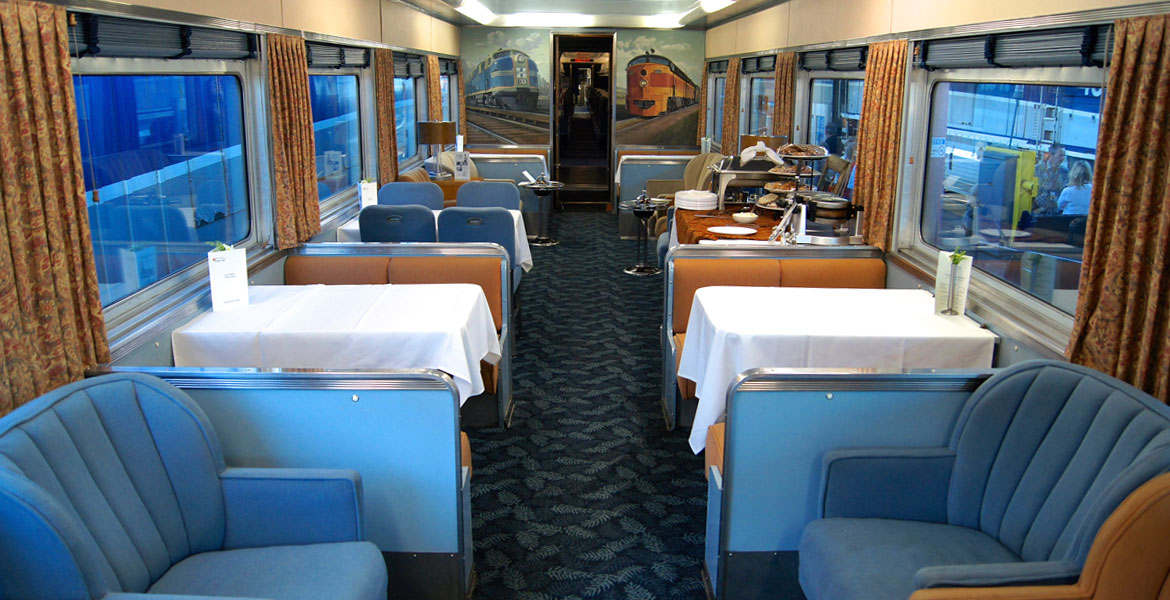 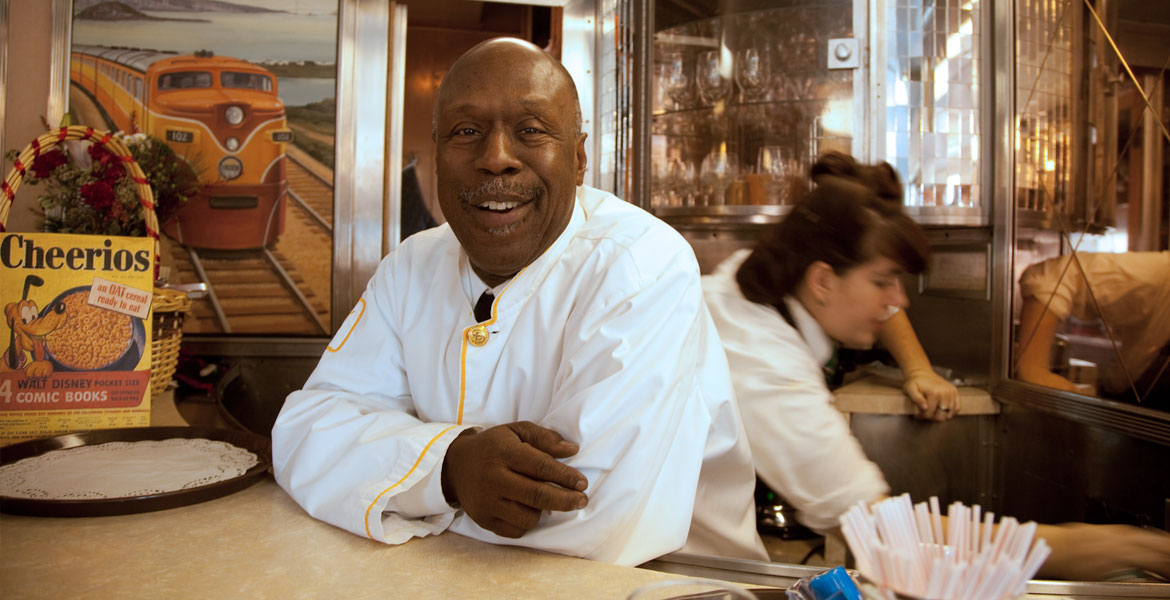 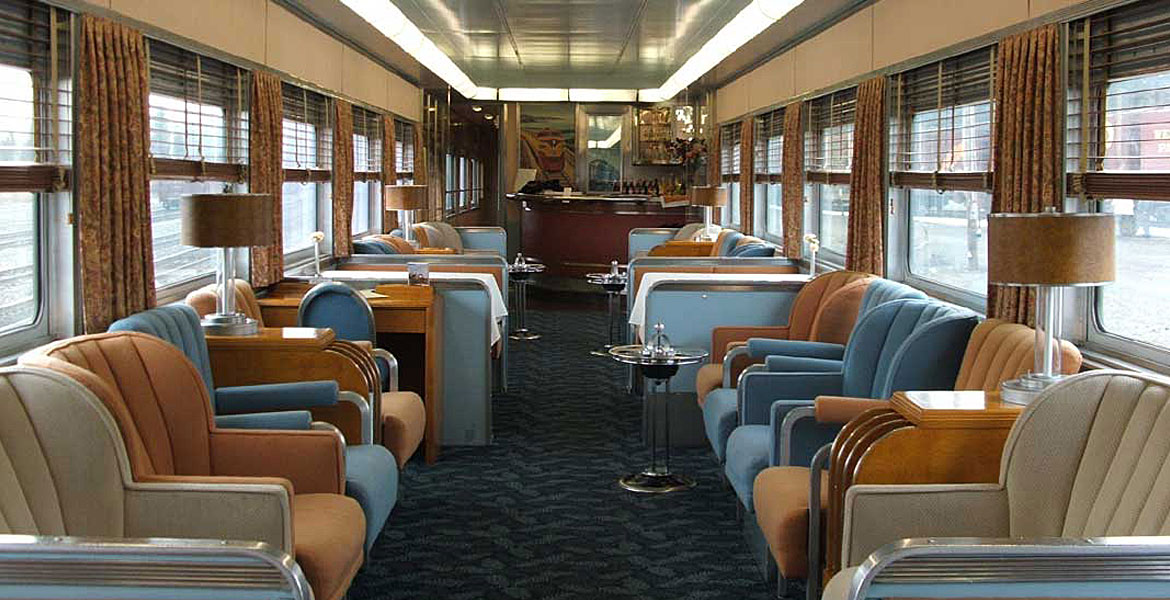 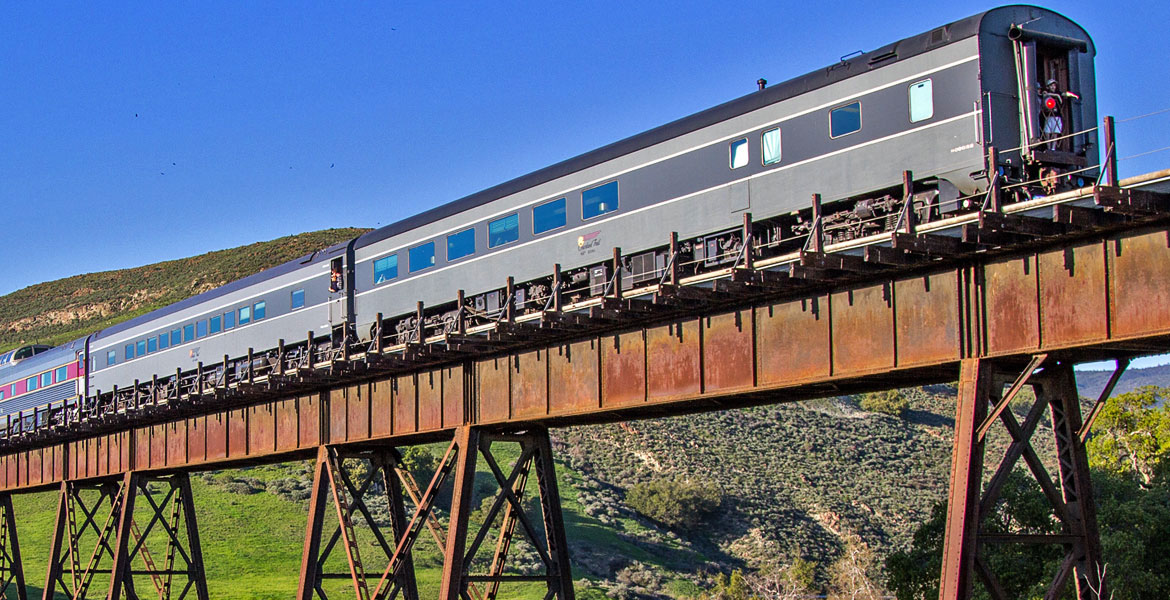 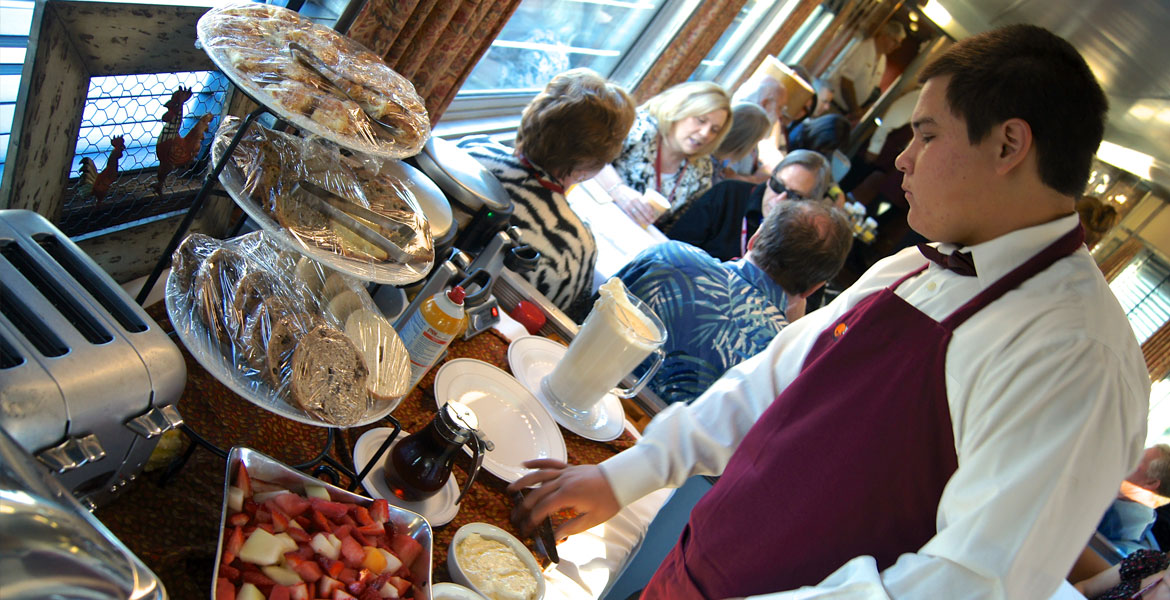 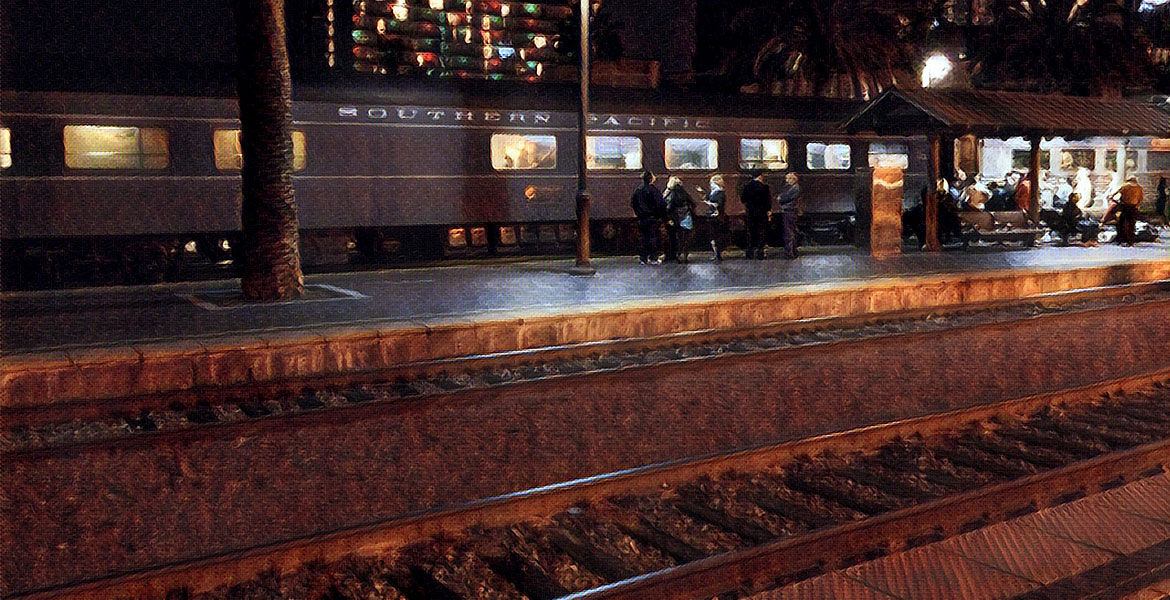